What better way to conclude your freshman year in high school than by rafting, hiking and camping on the historic and beautiful South Fork of the American River in Coloma, California? For five days this week, the Mother Lode River Center and Santa Barbara Adventure Company played host to seventy members of the freshman class of the Archer School for Girls. These intrepid adventurers tent camped on our beach, rafted two days, hiked another day and generally had the time of their lives! Spending an extended period outdoors helped them encounter the natural world while learning about themselves, bonding with their classmates, and expanding their ability to accomplish team challenges such as navigating a raft through Class III whitewater rapids. 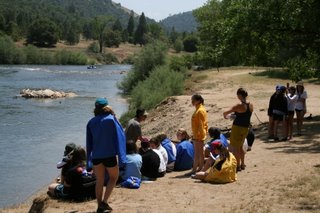 Seamlessly integrated into these activities were challenge course group games that heightened their awareness of their surroundings and also promoted connection to each other and the natural world. Campfires, facilitated sing-alongs, quiet time by the ever changing river- all these elements combined to make the experience something the students will remember fondly and benefit from for the rest of their lives.

This season the students also had the advantage of encountering the new Sustainable Practices Program at the River Center. For instance, each time they left the river center in Mother Lode’s new EcoBus, the fuel powering their journey was ecologically responsible 100% waste vegetable oil which reduced their carbon footprint by 80% when compared to the use of petrochemicals. The hot water they used in the kitchen was heated by our new solar panels. The Solar Energy Exploratorium was open for those interested and during their visit “PLUGRIN” the electric car made its debut demonstrating the potential for a true zero emissions vehicle.

On the their next to last day, blushing with the success of running “Troublemaker”, the largest rapid on the exciting Chili Bar Run, they had the opportunity to exercise their environmental muscle as well. One of their guides explained the importance of supporting the investment tax credit for solar power by writing a letter to their legislator. They enthusiastically wrote eloquent and well informed letters that Mother Lode will forward to Governor Schwarzenneger, President Bush, Senators Reid, Boxer and Feinstein and Speaker of the House Nancy Pelosi as well as the three candidates for President. By requesting a reply, these letters will allow each of them to discover where their political leaders stand and make each of them aware of their power to change the world in positive ways.

Experience, Connection, Observation, Stewardship- this is “ECOS” and for over thirty years this has been the Mother Lode Way. These Archer School students had a great opportunity to encounter and complete the full circle. We are pleased to have been a part of their world and we look forward to collaborating with the Santa Barbara Adventure Company to bring similar experiences to other students from the Los Angeles area in the future.