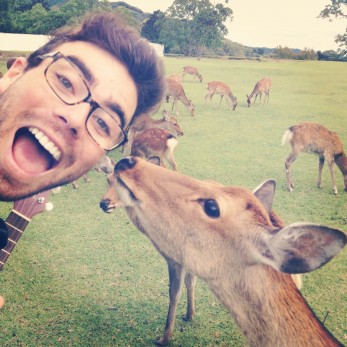 Saddest day: on a rooftop in India, where a merciless monkey stole his survival jar of peanut butter.
Scariest adventure: deepwater soloing up a 110 foot cliff in Thailand and backflipping into the blue beyond.
Biggest smiles: volunteering as a teacher in Kilometer 52, a small village in Laos.
Most humbling experience: scuba diving with seven whale sharks in the Philippines.
Hardest challenge: learning Chinese.
Luckiest moment: joining team Mother Lode.


Bio:  Remy loves animals, wild spaces, thrift stores, smelly books, sunshine, Japanese photo booths, surfing, rock climbing and white water rafting.  Remy believes gratitude is the path to happiness. During Uni, Remy managed a hippie hotel on Haight Street.  He published Frisco Okie, a memoir chronicling his reverse migration along the Dust Bowl Trail, in search of his Native American ancestry.  In July 2012 he began traveling around the world, writing and recording songs in collaboration with culturally diverse musicians.  Give your ears a treat at http://newyearsunbearmusic.com. Remy is dedicated instructor and a strong advocate of experiential learning.  His passion for education took him to Italy and Taiwan, as a theater teacher.  Now, on the banks of the American River, he loves living with his brother in the Cox Palapa and working with his new family at the Mother Lode River Center.