Spring Boating on the American River 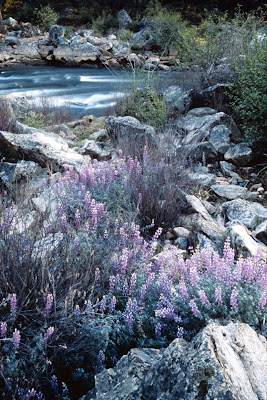 As winter turns to spring the reasons to go boating just keep increasing! One of my favorite reasons is all the green everywhere. On the North Fork of the American brilliant yellow poppies punctuate the intense green of the hills, and waterfalls tumble carelessly down the steep canyon walls. The Chili Bar run on the South Fork of the American is also famous for its poppy explosion. Drier years are particularly spectacular as they favor poppies over the beautiful purple lupine that share the slopes but predominate in wet years. Either way, April and May are the months to catch wildflowers!

When June rolls around the Middle Fork of the American has special appeal. Last season, in June, I saw a mountain lion cub dash back from the river’s edge and disappear into the brush. I wasn’t sure what it was until I replayed the image in my mind and realized nothing else disappears leaving a tail that long as its mental calling card. It was like a flourish at the end of ones signature.

Once the season gets going, there is just no wilderness river that lasts as long or offers more appeal than the Middle Fork. All the way through September one can enjoy plunging down the Tunnel Chute and disappearing in the foamy whitewater catcher’s mitt at the bottom of the rapid, then float serenely through the Tunnel to the other side of the mountain. Wow! I love to spend two days and camp overnight so I can smell breakfast cooking on an open fire in the morning. The native Brown Trout are huge, and I just bet I could meet one I released years ago to check out how it has grown.

Once again I’ve got myself all excited to enjoy another season of river running. Will I ever get tired of it? I don’t know, have I got a pulse?