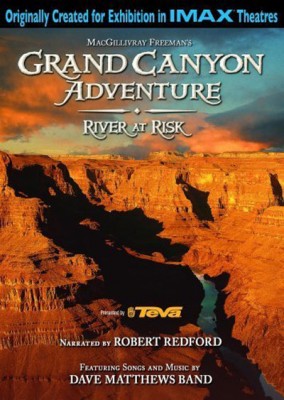 The Mother Lode staff took a break from whitewater rafting on the American River to go and view the new Imax Grand Canyon Adventure: “River at Risk!” This is a documentary film about the Colorado River that has exciting rapids, astounding side hikes and interesting characters ranging from gnarly old Canyon river guides to such luminaries as Robert F. Kennedy, Jr. (founder of Waterkeepers) and his beautiful daughter Kim, a Stanford University student. Kim is actually very cool and obligingly rolls over in her kayak as rafts and Grand Canyon style dories bob, weave and crash through huge waves and avoid holes the size of small houses.

This film accurately portrays the many challenges facing the Colorado, which, like all our rivers, is under pressure from the ever increasing needs of our rapidly increasing human population. The Mother Lode Staff gave it a solid “paddle high 5” rating and recommend the film to anyone interested in rivers, adventure and feeling like you are swimming a rapid without actually getting wet. The 3D effects rocked and it took a while to get our land legs back!