On these rainy days in the office on the American River, we (the few who spend the winter here) often start to think about the adventures of the past seasons. And while we had many spanning through the spring, summer and fall, the peak of adrenaline and challenge was (for myself and several others) undoubtedly achieved on the Upper Tuolumne River, also known as Cherry Creek. This 8.6 miles class V run is considered by most as the most difficult commercially run stretch of river in the country. With an average elevation drop of 105 feet per mile include the “miracle mile,” which drops 200 feet, it’s easy to see why. 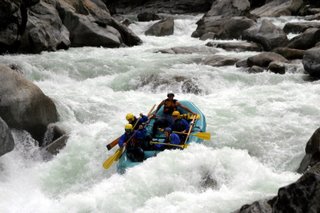 The leader of our group was Aaron Root, a solid class V boater with fantastically wild lampchop sideburns that would easily win the blue ribbon in any county (if there were such a category at the fair; I wish there were). In his boat were three of the Malode ladies; there was Sarah Shakal (aka, The Shock) who had only been on the run once before; Colleen Hardiman and Mary Maliff, who had never been on the run. Kayaking along with us was Suzie Jaques, and it was also her first time kayaking Cherry Creek. In my boat were a few of the Malode dudes: Lindsey Gulyas and Kyle Gordon (The Texan), as well as Angelo Munoz Rios (a Chilean guide newly arrived in California), all of whom had never been on the run. Oh yeah, I had only been on it once before too, and had never guided it.

The first time I rafted Cherry Creek few years before, our boat ended up flipping twice and flat-wrapping once so badly that we had to bust on the ropes and pulleys, so I already had a little anxiety going into the trip. When we woke up the morning of the trip at Meral’s Pool and our other guide still hadn’t shown up, my stomach shrank as I realized I’d have to guide it. As we began the routine of rigging though, I began to feel less nervous and actually started anticipating the opportunity. Then I got nervous again as we rigged the flip lines. Then calm again. Then scared. Then Excited…ad infintum, until we slid the boats down to the river’s edge. Then it was time to, as the battle-cry of the summer went, “Fire it up!”

The first few miles of Cherry Creek are sort of a warm-up, with some decent class IV drops and boulder gardens. Aaron would look over his shoulder and holler directions if he felt it necessary, and then we’d plunge into the rapid. We all felt good and for the most part in sync with one another so far; woots and paddle high fives galore were happening everywhere, as well as more personalized celebrations. Angelo made a habit of sticking his tongue out really far and then shaking his head from side to side so fast that his tongue jiggled, all this while still excitedly wooting. Lindsey’s celebration was to rock in his seat like a psych patient and beat on his knees with his fists still white knuckled and gripping the paddle blade. Kyle, recently having become obsessed with the movie Into the Wild shouted, “I’m Alexander Supertramp!” twenty-seven times that day. 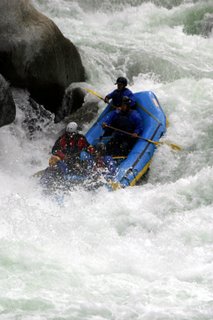 Near mile 2, we came to our first class V rapid, Guillotine, which we stomped through fairly easily. Up next, was corkscrew, which has a huge undercut rock near the exit on the left. Now, guiding in a raft full of raft guides is great in a lot of respects, don’t get me wrong. But there are some downsides. All guides want to be in control; in fact, it’s sort of their auto-pilot mode. So having to listen and then actually carry out the commands coming from another person, even if it’s someone they know and trust, is sort of, well, impossible. What I’m getting at is, Angelo was starting to freelance, to throw in his own strokes that I wasn’t calling out. It ended up helping us on this rapid, and we cleared the undercut with no problems, so no one said anything. But up next was Jawbone, a more technical boulder garden with some decent drops. We were all still juiced and made the moves we needed to make, but it was a fight. Then we pulled over to scout one of the most difficult rapids, Mushroom.

Getting a good vantage point we watched Aaron take his boat through, but not easily, bumping along the guard rocks at the top and just barely making the move far right before ferrying as hard as possible back to the left toward a huge upstream pillow coming off the mushroom rock, which they ended up riding up on, tipping the boat like a bath toy, but not flipping it, and all of them were able to stay in the boat. By this time, two other boats who had been running with us entered the rapid, one of which got swept to the far left and pinned in the guard rocks. After a lot of shifting bodies around and tugging, they got it free and made it over the pillow, their guide getting launched all the way into the front seats and landing on the back of one of his paddlers. We ended up going through last. We decided after we watched the third boat to back-paddle through the move to the right so we’d be facing the left hand shore and wouldn’t have to spin the boat to make that move. It ended up working beautifully, and we got all the way across to the far left of the mushroom rock. We were nearly dancing in our boat after we exited the final drop smoothly. 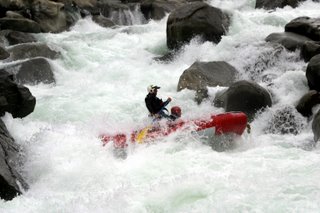 Almost immediately after Mushroom, is another big class V rapid, Toadstool. Aaron was yelling the directions to us but it was getting hard to hear him because he was actually losing his voice. We decided to just follow them as best we could. After sliding thro
ugh the first hydraulic though we saw to our horror that they’d been sucked into a strong eddy just above a big drop into a huge muncher of a hole. It might have been a bit easier to get out of that eddy if there was only one boat in there, but with us following Aaron in, there was hardly room to maneuver, every time we tried to exit the upstream end we be pushed into his boat stubbornly. Finally on the fourth try we made just far enough back into the current so as not to be sucked back into the eddy. The problem was we rode up the boulder on the left side of the drop sideways. All of us leaped to the high side. The boat stood completely vertical on its right tube. We felt it wobble in it’s precarious balance, like a child learning to ride a bicycle, as it slid down into the hole. It happened too fast for me to think about if we were actually going to swim and what the swim in that monster hole would be like; all we really know is that we landed right side up. We looked up and heard cheers and holy expletives. I could hardly believe it.

We rode our triumphant wave through the next big rapid, Catapult, and then found ourselves quickly heading into the “Miracle Mile”. Aaron’s voice was almost completely gone by now, and all he was able to say was, “keep it up, it’s read and run for the next mile.” Everyone paddled their hearts and lungs out through Gar’s Lunch, Blind Faith and Coffin Rock. I cursed the bluest streak imaginable trying to steer our boat through some of the boulder gardens; all my friends on the raft agreed that I must have temporarily summoned some ill-fortuned sailor from beyond the grave. By the time we reached the next eddy above Sky King we were exhausted but happy and swigged as much water as we could in preparation for the next set of rapids. Sky King went much better than the last time (this was where our first flip happened on my first visit to Cherry Creek), and we headed into the next set, where one boat wrapped badly in the first boulder garden, and our boat nearly ran over a friend who was kayaking at Christmas Tree Hole.

The next big rapids were Airplane Turn, where just after the drop, another of the boats running with us wrapped. Lewis’ Leap, which has a huge drop in the center of the rapid that you have to ferry hard left while passing around a set of shallow wrap rocks. We made the move and made the drop, which I thought felt like the biggest drop on the run. By this point I was so tired that I wanted to trade out guiding, having finished the hardest rapids, but everyone wanted me to keep going; Angelo said it best, “todo o nada.”

We completed the portages of Flat Rock Falls and Lumsden, the latter of which Aaron made much easier by solo-paddling all four boats down, only one of which flipped; what a beast!

We bumped and grinded down the remaining class IV section, to the end of our run at Meral’s Pool, where camp and a well deserved rest awaited us. We gave one more exhausted cheer as we pulled into the eddy. As we lay in the boat after changing out of our sweaty dry tops and thermals, we were already talking about coming back to run Cherry Creek again.

One Response to “Firsts on Cherry Creek”

Without Penny, none of the magic of the Mother Lode whitewater rafting experience and outdoor education could happen. Her helpfulness and sweetness on the phone lead many customers to come looking for her when they arrive at Mother Lode.