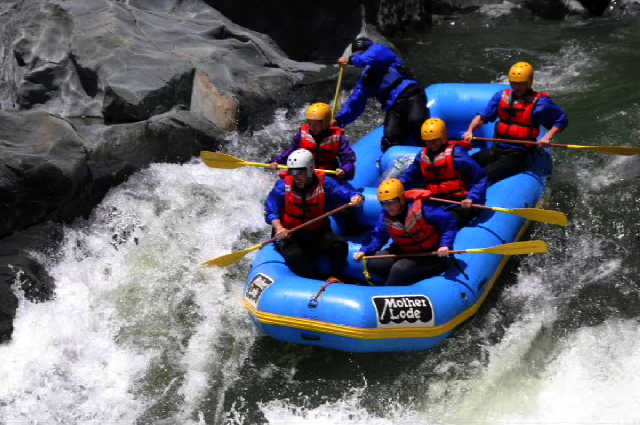 The atmospheric river is responsible for delivering sufficient water for rafting on the South and Middle Forks of the American River! What is an “atmospheric river”? How can we know what rafting flows will be like? How does this relate to whether California is in drought? If you are interested in the answers to these questions, read on!

Understanding the patterns that determine California’s weather has been a subject of heated debate among whitewater boaters for decades. No one I know explained them better than Ken Brunges, one of the founders of Mother Lode, who understood that the precipitation that makes rafting possible on the Forks of the American River usually comes in 3 to 4 large storms each year. Miss one of these storms and it is a dry year, get an additional storm and it is a wet year. More than one in either direction means drought or flood. The point was that each storm is so large that the overall outcome in California is particularly uncertain and until the rainy season is completely over, huge errors in prediction can occur. One of the best examples of this phenomenon occurred in 1991 when a “critically dry” year suddenly became a “wet” year as several large storms rolled in during the famous “Miracle March”.

Climate science has yet to overcome the unpredictable nature of California’s weather, but it has recently helped to explain it. We now know why California’s water supply is not delivered gradually over time like a drip irrigation system, but rather arrives in a few massive pulses of moisture that resemble a firehose. These pulses are being carried by the Jetstream across the Pacific Ocean from Hawaii. This “atmospheric river” of moisture can vary tremendously in width, from 20 up to 300 miles, and have lengths up to 1000s of miles. This configuration makes it look and function like a “river” transporting up to 10 million acre feet of water vapor in a single storm- 7.5 times the volume of the Mississippi! This vapor ultimately condenses into precipitation which falls either as rain or snow depending on how cold the pulse becomes as it approaches the higher elevations of the Sierras.

The reason these “rivers” eluded detection for decades, even after weather satellites became common, is that the water vapor that composes them is essentially invisible to both conventional satellite photography and radar. Only when weather data gathering became more sophisticated in the 1990s was the significance of these “rivers” fully appreciated. It is now evident that they help explain why the State of California receives most of its yearly precipitation in a period of only 5-15 days each year. The magnitude of these storms is truly world class and they are as big and wet as the largest storms that hit Hurricane Alley!

(Source: Dr. Alexander Gershunov of Scripps Institute as quoted in “Hungry Water” submitted May 4th, 2012 by Emily Underwood to Johns Hopkins University in conformity with requirements for the degree of Master in Arts in Science Writing. More of this thesis will appear soon in our blog, it is great reading!)

Given the unpredictable nature of these “atmospheric rivers”, how soon can we know that dam controlled rivers such as the South and Middle Forks of the American River will have rafting flows this year? In most years the answer is known very earThe key reason is that the way we manage the flows from dams has been refined in recent years. Although the volume of water necessary to facilitate whitewater boating represents a small fraction of the total water released, it is the timing of the releases, not the total volume, that is adjusted. The result is that on the South Fork of the American River where the majority of California’s whitewater rafting occurred in 2014, rafting flows are provided based upon a collaborative agreement between SMUD, PG&E and the Federal Energy Regulatory Commission (FERC) that results in excellent recreational flows, even in a drought year.

Doing our rain and snow dance in Coloma-
See you on the river,

Scott, Charlie the RiverDog, and the MaLode Crew